The Fort-500 shotgun was developed by Scientific and Production organization Fort (NPO Fort) of the Ukrainian Ministry of Inferior. The FORT-500 shotgun was designed during late 1990s as a police / security weapon, and is in limited production and use by several Ukrainian police and security organisations. It is also offered for civilian sales in Ukraine in hunting configuration. It is not known if Fort 500shotguns were ever exported in any numbers. Recently, NPO Fort also introduced a police-only version of their gun, the Fort-500M, which features short 35.5cm (~14") barrel and 'tactical' furniture that includes retractable buttstock and pistol grip, and a set of Picatinny rails on receiver and for end.

The Fort-500 shotgun is a conventional pump-action shotgun, apparently patterned after the famous Remington 870 shotgun in its internal design. It has steel receiver and plastic or wooden furniture; in all versions barrels are available with removable choke tubes; same choke interface on police guns allows for installation of cup-type launchers intended to fire tear-gas grenades. Feed is from underbarrel tubular magazine, which holds 6 (for Fort-500) or 4(Fort-500M) rounds. 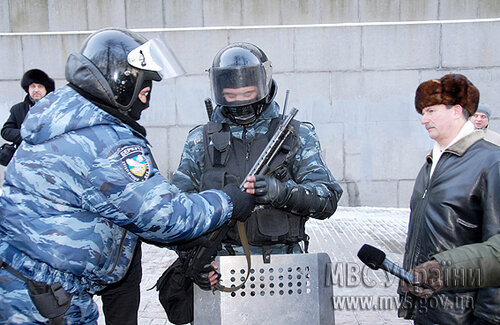